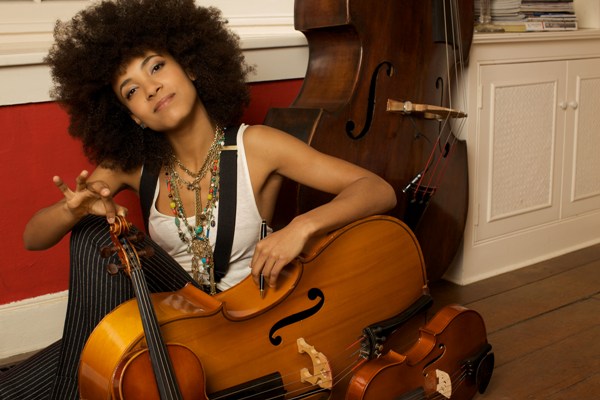 Once again, The Urban Music Scene is always excited to have featured guests on our site, hanging out & sharing their thoughts about much of what is going on with their music today! Heads Up International Recording artist Esperanza Spalding drops by & chills with Terrill in regards to her new release “Esperanza” & lots more! Enjoy!!
(Interview in July, 2008)

TERRILL: The Urban Music Scene is going on and on and on. We’re raving big time about the new release from a young lady who’s playing that Stand up Bass relentless and the beautiful vocals behind the mic, otherwise known from Heads Up International, Ms Esperanza Spalding is in the house, what’s up girl?

TERRILL: You’re chilling like a villain! And you’re keeping it steady, aren’t you?

TERRILL: How excited are you about your new release?

ESPERANZA: Ah man, I guess I am excited as I can be. Also, knowing it’s part of a long journey. So I try to, … I don’t want to make it too unique, ’cause I want to keep making records that are better and better and better, you know? It’s almost like – it’s like “A” and let’s get to “B” and beyond.

TERRILL: Absolutely, now you have graduated from Berklee College of Music and you’re currently a professor?

ESPERANZA: Well, I am an instructor.

ESPERANZA: Technically, yes, I teach there.

TERRILL: Do your thing girl!

TERRILL:  After reviewing your CD for the site, I’m extremely impressed, Esperanza, Ms Spalding – shall I say. Your music is just awesome.

ESPERANZA: Actually just that. That you don’t get it out of your mind. It’s like People hear and it’s haunting. I remember the first time that I heard the song. I heard it once and it was in my brain. I remember I ran into a couple of friends that I hadn’t seen and that were from Brazil. I said hey, have you ever heard this song? I started singing the melody and they said, “Ooh my, oh that’s the most beautiful…” It’s like it touches some heart string in everybody. I said man, that would be a beautifully way to start a record with – and to record this arrangement of it that, it kind of have a groove behind it and you get that haunting melody that can sink into you.

TERRILL: Yes. And then the rest of the CD just flows, I mean there’s a unique sound. Do you classify this type of sound as being an authentic Latin jazz piece?  Is it just straight jazz? How would you describe your album?

ESPERANZA: I don’t know. I mean I hope there’ll be a word to describe the type of music that people in my generation is doing but maybe it hasn’t been invented yet or some sort of composite word. I don’t know. I don’t like to necessarily associate it too strongly with other genres. I mean, like with any music, It has a lot of influences. I don’t really know the closest genre that the record lends itself to. There are so many influences. Latin jazz normally conjures up a different image than I would like to have my record associated with. So I’m not really sure actually. I think the title that I like, you know, when you go to the record store and they have R&B, Soul, Pop, Folk, Acoustic. So if it was going to be shelved, I’d like for it to be shelved in that section.

TERRILL: It shouldn’t really matter because basically it has its own trademark. It is a beautiful CD and I can’t stop talking about it. I am proud to say that as the site continues to publish it and put it out there, your fans are coming in and they are admiring it in many more ways than one. So God Bless you on the project and we just look forward to more coming. Other than that, are you going to be touring anytime soon throughout the United States?

ESPERANZA: Oh yes, we’re doing a lot of stuff. Just starting gosh (-chuckling-), I guess this week actually, Saturday, we’re leaving for Philly, then we are going to San Francisco. We’re doing the West Coast Tour – Seattle, Portland, San Francisco, L.A., then when that’s over, The East Coast for some dates and back to the West Coast. Then over to Europe in June, July. So, we’re getting around, we’re getting around.

TERRILL: So, when are you coming to L.A.?

ESPERANZA: We’ll be at Catalina June 11, I believe.

TERRILL: I’m going to be there.

ESPERANZA: You need to come out.

TERRILL: You need to save me a spot because T is coming.

ESPERANZA: I will. That I will do.

TERRILL: I’m going to check you out, ’cause I know you’re going to do it! That’s going to be sweet. Now when you’re touring, are you touring with your own band and/or how many members are in it?

ESPERANZA: It’s a quartet now. We added a guitar player and he sings, so we kind of have that big village effect, that the record has you know.

TERRILL: So how many people total, do you have in your band?

ESPERANZA: And we kind of just sing together.

TERRILL: Ok good, great. And of course many of them participated on your album right?

ESPERANZA: Yes, the only person that’s new is um, the guitarist Ricardo Voch. He wasn’t on the record. But everybody else Parlato, Genovese and Otis Brown – They are the Three on the record.

TERRILL: I’m digging it! What influenced you to play jazz?

ESPERANZA: This. I play the acoustic bass. I mean if you play certain instruments and then you end up being called for gigs, especially on acoustic bass. I mean, other instruments circulate other genres, but for acoustic bass, eventually someone’s going to ask you to do a jazz gig. Actually as I was learning it, the style of music that I was learning that was helping me to understand the role that the bass could play essentially in a band, it was jazz. It was that music.

TERRILL: Ok. Was there a particular jazz artist back in the day that you kind of put an ear to?

ESPERANZA: At the beginning, no. At the beginning, I was in a room and the teacher came in and said ‘OK here’s the blues’ form and then you walk.’ I was like “why, what? Yeah, whatever.” And he taught me basically the concept of walking bass, which is one of the obviously, that’s one of the roots of, you know? One of the roles that a bassist does. And it kind of evolved from there, meaning I had to go investigate what bassists before me had done, in this walking idiom. And that asked the question of who are people like Ron Carter, Scottie LaFaro, Milt Hinton? Everyone in the world that can I could get my hands on basically.

TERRILL: Wow, and be able to stand up with that bass and be able to sing at the same time. Girl, that’s a remarkable feat! And the way you do it with precision. I’m sure you get a lot of feedback on that.

ESPERANZA: Well, yes. It’s weird. It’s so natural that now it doesn’t feel like a feet, a third foot. It’s like watching drummers play. Over time you learn to keep the beat going. I think it’s like the same thing. It’s kind of like second nature now.

TERRILL: Absolutely. Now aside from your music, is there anyone out there today that you are paying attention to, that you are listening to? Somebody out there in the music world that is grabbing your attention? 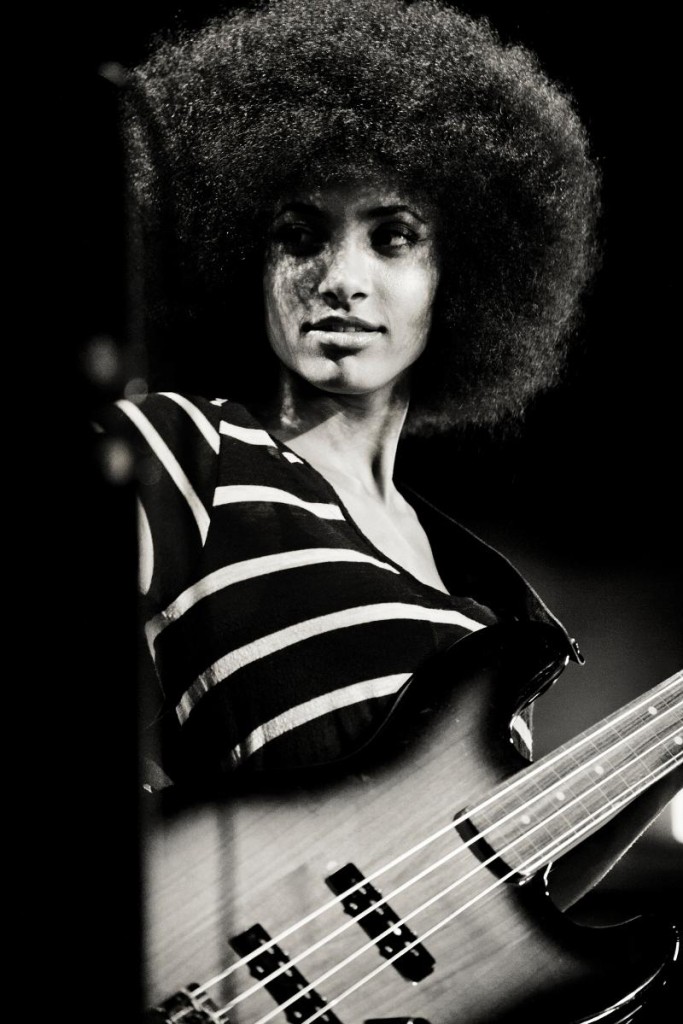 ESPERANZA: Yes! He’s ‘killing’! The stuff he does, & I have to find out the name of the other one (music artist), but I want to tell you. I’m…. Hold on a second.

TERRILL: Yes, Dwele is good. I like his music.

ESPERANZA: Awesome. Those arrangements, ah come on now I love it!! And Bilal.

ESPERANZA: And Matt Brewer has this record. I mean people like Ledisi, come on…!

ESPERANZA: Have you ever heard of this cat – there’s this girl called Darma….? A Brazilian duo. They are so hip.

TERRILL: Guess what, the staff, the Urban Music Scene is going to do the research, we will find them.

ESPERANZA: I’m telling you, you’re going to trip! Oh my…! I can’t believe it!

TERRILL: Really? It’s off and cracking like that huh?

ESPERANZA: I think so. I think it’s amazing!

TERRILL: All right, well I tell you what: you’re amazing! Keep doing what you’re doing girl, you know what I mean?

TERRILL: You’re changing the aspects of the young listeners as you plant your feet and hopefully will influence more young musicians like yourself, young up and coming musicians to go and take that center stage and showcase their talent. It’s a beautiful thing and I look forward, I can’t wait to see you when you come to L.A.

ESPERANZA: It’s going to be fun. You are going to have a lot of fun.

TERRILL: It’s going to be on at the Catalina Bar & Grill, right?

TERRILL: Oh absolutely. And I know the East Coast has got to be popping. You had a CD release party didn’t you?

ESPERANZA: I had a CD party in Boston and also we’re about to have one out in
Oakland at Yoshi’s.

TERRILL: Yes, I know exactly where it is.

ESPERANZA: Oh yes, and then we’re going to have waffles at the waffle and chicken house across the street.

TERRILL: I’m going to have to treat you to lunch over there next time I come by & say  – “Hey Esperanza, it’s Terrill, I got you girl.”

ESPERANZA: Thank you man, thank you brother, this is tight!

TERRILL: Likewise – I got to keep it right, so… I appreciate you stopping by. Do you want to do a part 2 of our interview down the road? 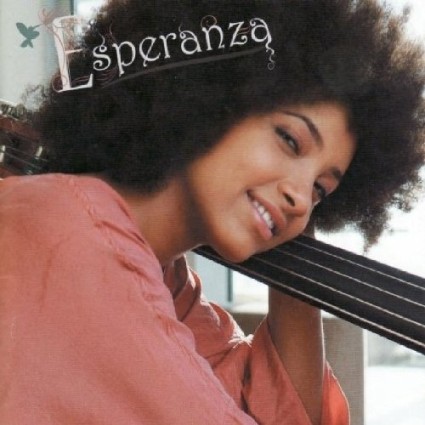 ESPERANZA: Of course. Let’s Do It.

TERRILL: Maybe we could do it in LA

TERRILL: Is there anything you’d like to say to our Urban Music Scene readers?

TERRILL:  All right girl. Talk To You soon!

One Response to "Our Conversation with Esperanza Spalding | 2008"