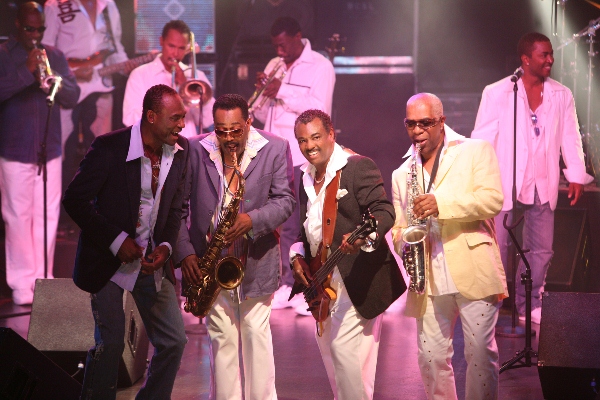 In this polarizing political time in America that has seen the first Black President of the United States on the one hand followed immediately by a rise in bold-faced racism rearing up to the level of the civil rights era `60s, a concert bill of Van Halen with Kool & the Gang as their “special guest” opening act of their 40th Anniversary “A Different Kind of Truth Tour” feels almost like a Litmus Test for tolerance.  Yet, music across the ages has always had some positive effect on bringing people together – especially for both of these bands that, in their own ways, are ultimately all about having a great time.

Therein resides my hope for this package.  Because even back in 1984 when the Van Halen quartet was riding high with its pop breakthrough MTV-aided smashes “Jump,” “Hot For Teacher,” “I’ll Wait” and “Panama,” and Kool & The Gang was in the midst of a string of rainbow-styled crossover hits such as “Misled,” “Cherish,” “Joanna” and “Fresh” – just such a tour would never have happened yet would have been quite a pairing to behold for music fans able to see beyond Black and White.

I had the pleasure of catching up with Kool & The Gang leader/bassist Robert “Kool” Bell as the tour was just making its early way out of Ottawa, Ontario into the U.S. proper to talk about the excitement and implications of this tour, what it means for the band {“celebrating” its 48th year – first formed as  instrumentalists The Jazziacs – now a sprawling 11-member road ensemble that still includes four originals: Kool, his brother tenor saxophonist Ronald Bell (Khalis Bayyan), drummer George “Funky” Brown and alto saxophonist Dennis “DT” Thomas} and what it means for a country in ever-mounting need of more “peace and unity” (a la their jazzy classic think piece “Heaven at Once”) and “Love and Understanding” (as in their 1976 anthem of the same name and its funky reprise “Come Together”).

A. Scott Galloway (ASG): How was Kool & The Gang approached to take part in this tour?

Robert “Kool” Bell {RKB}: David Lee Roth saw us perform at the Glastonbury Festival (in England) so he contacted Sal Michaels at Pyramid Booking Agency who reached us through Adil Bayyan in our management office and said they were interested in having us open up for them on their 40-year celebration tour.

ASG: What was your initial reaction?

RKB: I thought it was quite interesting… Van Halen is a rock party band.  Come to find out they used to play some of our stuff when they were first starting out (at the Starwood club on the Sunset Strip in the `70s) – “Hollywood Swinging” and “Funky Stuff.”  They were the party rock band of the `80s and we were the funk-pop party band of the `80s.  Their audience is 60% ladies, we have a big hit called “Ladies Night.”  Dave said, “Let’s put it all together and have a party!”

ASG: When you agreed to do this tour with Van Halen, what was the main appeal for you?

ASG: I’ve got to hear the story of Kool & The Gang’s first face-to-face encounter with Eddie, Alex, Wolfgang and “Diamond Dave” of Van Halen.

RKB: Well, it was at the Forum arena in L.A. where we were all rehearsing for the tour.  It was a great meeting because some of the other guys in our band like our guitarist/lead singer “Shawny Mac” (Shawn McQuiller) – who’s been with us for about 20 years – told me that before he joined Kool & The Gang there was a gentleman from the rock band Poison that was interested in his group.  They came and saw them rehearse but at the same time we were looking for a new lead singer and our people called him.  But Shawny Mac said that at one point he’d met Eddie Van Halen and at another point met David Lee Roth.  So they were reminiscing.

The other thing is when Kool & The Gang started out in the `60s and early `70s, we used to play a place called the Café Wha? in New York.  Come to find out members of David’s family were one-time owners.  They used to have a thing called “The Hootenanny” where they invited young groups up to play.  They fed us a turkey sandwich and some potato chips then we did our thing.  Right before Van Halen kicked their tour off, they did a media show at Cafe’ Wha?.

ASG: I imagine your lifestyles are vastly different but has there been a strong sense of camaraderie?

RKB: We see them during the day at sound check…sometimes we’ll run into them at catering.  We’ve still got three months ahead of us…it’s building every week.

RKB: Our show starts off and we know exactly what we’re going to do.  The first half we go with some of our AOR records like “Misled,” “Emergency” and “Tonight” which have a cool rock edge to them.  Then we hit `em with a little bit of “Too Hot,” then we go into “Hollywood Swinging” and “Jungle Boogie.”  By the time we get to “Ladies Night,” “Get Down It” and “Celebration,” if they weren’t movin’ before, the whole house is movin’ by the end!

What I see is by the time “Jungle Boogie” comes on, the ladies are up partyin’.  So whoever they brought with them that may have had their arms folded, they’re doin’ their thing now.  They don’t want the ladies lookin’ over at them saying, “What’s the matter with you?  If you came with me you better get down on it or somethin’!” Most everybody knows “Celebration,” so by the time we get to the second verse, they’re all singing along…even if they don’t want to.  So it’s been great.

After the show we get great comments.  Of course, we never come on stage to a full house.  By the time we get to “Hollywood Swinging,” we’re playing to about 70% of the house.  When Van Halen comes out they have `100% of the house.  And all of the shows are selling out.

ASG: I was very concerned about the audience reaction to this tour.  There were some rude statements made on blogs about Kool & The Gang not belonging on tour with Van Halen.  I had flashbacks of Prince being pelted with garbage back in `81 when he opened for the Rolling Stones here in L.A. at the Coliseum.

RKB: Yeah, I heard about what happened to Prince when he opened for The Stones.  We had some concerns about that when we first considered doing this tour with Van Halen.  Bon Jovi, Bruce Springsteen or The Dave Matthews Band might have been easier.  But Van Halen – woooo… that’s “waaay across the street!”

ASG: Kool & The Gang has been around for over four decades now. This can’t be the first time you’ve performed with rock bands.

ASG: Were there any times in the early `70s once the De-Lite records started dropping – especially after your sixth album Wild & Peaceful (the 1974 breakthrough that featured  “Funky Stuff,” “Jungle Boogie” and “Hollywood Swinging”) – when you played with American rock bands?

RKB: No, in the`70s we usually played with bands like WAR, Mandrill and “P-Funk” (Parliament-Funkadelic).  Every now and then we might do a show with Three Dog Night, The Young Rascals or somebody like that.  But it was mainly all on the urban side in the `70s – in The States, anyway.

ASG: What is the tour schedule?

RKB: It’s typically one day performing next day off and when we get a break it’s usually for about four days.  It’s not so much gigging night after night that wears you down.  It’s flying – getting up early, getting to the airport and dealing with TSA.  So for these shows, we’re on tour busses.  We leave in the morning, get on the bus, travel 5 or 6 hours.  If it’s more than a 6 hour distance, then we get on the bus right after the show that night, everybody sleeps and we keep it movin’.

ASG: I know it would be a stretch to do on these arena shows but does Kool & The Gang still play its instrumental “jazzy stuff?”

RKB: We do that when we have our own show but we’ve only get 50 minutes opening for Van Halen whereas our full show is usually two hours.  On our shows we still do “Summer Madness,” “Open Sesame,” “Funky Stuff”-

RKB: (laughs) Oh, wow, we haven’t done that one in a while!  My brother and I were just talking about that the other day.

ASG: Would you consider doing a tour where Kool & The Gang headlines and you have a rock band open for you?

RKB: Our agent in Europe booked Foreigner to open for us.  I could also see us with The Doobie Brothers or Chicago (who toured extensively with Earth Wind & Fire for two years).

ASG: After this tour with Van Halen, what’s next for Kool & The Gang?

RKB: We’ll be looking to go back on the road.  We also have a few album projects.  My brother and I are working on a (special project) with Bootsy Collins, Nile Rodgers and the bass player of Chicago (Jason Scheff) and Charlie Wilson.  Maybe we can even get Eddie Van Halen to join us.  The band might also do some spot dates at clubs like the House of Blues…and focus just on our funky stuff!

(Parting thought: As a fan of all music, I think this tour offers music lovers a golden opportunity.  For anyone attending that is initially resistant to the idea, at least allow yourself a chance to check out the band, “Let the Music Takes Your Mind” and maybe, just maybe, even get off on the groove… just a little bit!)